Every year, thousands of people from all over the world journey to the New and Gauley rivers to ride some of the best whitewater rapids in the east. Rafting companies in the area entice travelers with guided trip packages that include perks like lodging, dining and a wide range of recreational activities from horseback riding to zipline canopy tours.

What has become a major tourism driver today had its humble beginnings in 1968, when whitewater pioneer Jon Dragan and his brothers founded Wildwater Expeditions Unlimited, West Virginia’s first commercial whitewater rafting business. After the emergence of the New River Gorge company, more rafting companies began to follow suit, spreading to additional rivers in West Virginia, and a multimillion-dollar industry was born.

This summer, as the whitewater rafting industry celebrates its 50th anniversary, take advantage of one of these great deals: Home of the iconic Red Dog Saloon & Grill, River Expeditions is just minutes off the main drag’s shopping and dining region yet secluded enough for a relaxing getaway in the mountains. The family-owned company is planning several celebrations to commemorate whitewater rafting’s 50th anniversary.

“We’re grateful to the pioneers of our industry who pursued their passion for whitewater and their desire to share the experience with others back in 1968,” co-owner Heather Johnson said. “The whitewater industry has certainly evolved over the years, but the river is unchanged.”

Spring rafting packages start at $79 through the end of April. On June 20, in celebration of both West Virginia Day and whitewater rafting’s 50th anniversary, you can snag an express rafting trip on the New River for just $50. 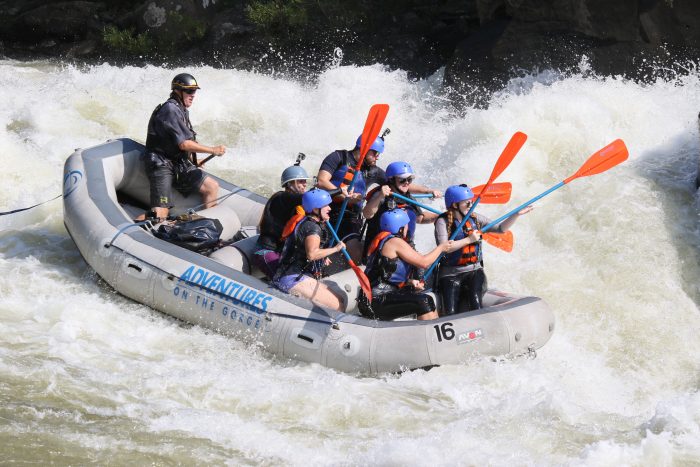 Adventures on the Gorge

With its breathtaking views of the New River Gorge, Adventures on the Gorge also is home to the famous Timbertrek Adventure Park—a combination ropes course, canopy tour and flying circus school. The company was founded in 2008 when three whitewater outfitters—Mountain River Tours, Class VI and Rivermen—merged to create the full-service resort. (Songer Whitewater joined the group in 2011.) This summer marks the 10th anniversary of Adventures on the Gorge as well as the 40th anniversary of Songer and Class VI.

In honor of the two outfitters launched in 1978, AOG is offering 40th Anniversary Deal Days this summer. On the 15th day of June, July, or August, you can raft the family-friendly Upper New River or the rollicking Lower New River for only $78 per person. Or celebrate all the anniversaries on June 9 with Brewgrass Reunion, when six smokin’ hot bluegrass bands take the stage. Festivities include a West Virginia brews tap takeover. Jon Dragan’s Wildwater Expeditions formed a partnership with North America River Runners to become ACE Adventure Resort. The 1,500-acre resort is world-renowned for its 5-acre Wonderland Waterpark—a spring-fed mountain lake with inflatable water toys for climbing and playing on, water slides and even a zipline water ride. ACE also sponsors trail races and a mud run at the resort.

Celebrate 50 years of whitewater rafting at ACE with spring rafting trips on the New River starting at $79. Or kick off the summer season at ACE with a campout at Mountain Music Festival May 31—June 2, featuring 25 bands performing on four stages around the resort. Several VIP festival packages include activities like zipline canopy tours, whitewater rafting and meals.

All of West Virginia’s whitewater rafting companies, from the biggest to the smallest, offer great deals and packages all season long. The West Virginia Tourism Office is happy to help you in planning your next adventure or assist with any questions you may have. Call 800-CALL WVA to request a travel guide or speak to a travel adviser.

Have you booked your trip yet?