The Mountain State is full of funky art galleries and sophisticated art museums. But during the warmer months, get your sunshine AND art fix at one of the many outdoor public murals around the state. Be sure to bring your camera and snap some memories!

Start your artcrawl with:

This bucolic region boasts 2 certified arts towns. Both have vibrant murals, plus quirky attractions and galleries you can visit on the side.

Let’s start with Princeton. Larger-than-life wall art makes this city pretty unique— and that’s putting it mildly. There are monsters by While you’re in town, check out the RiffRaff Arts Collective. The rambling building serves as a co-op for artists of every description: painters, dancers, sculptors, and musicians. There’s also a recording studio and restored ballroom, where you can listen to live performances.

Less than 20 minutes away is Bluefield, “Nature’s Air-Conditioned City.” The high-altitude community is famous for its temperate summers — a bonus for any artcrawl. In fact, if weather goes above 90 degrees, locals offer free lemonade to lucky visitors!

While the mural is in grayscale, Chicory Square’s miniature trains are like little rainbows. Each one was painted by a local artist. Some locomotives feature colorful passengers, while others sport landscapes and funky patterns.

The First Friday concert series at Chicory Square is another highlight. During summer, locals mingle and listen to jazz bands, singers, and local choirs.

Before you leave, check out Hal Brainerd Gallery. It’s a studio owned by a nationally famous photographer. His luminous landscape photos, portraits, and animal scenes have won multiple awards (including recognition from Hillary Clinton). You can visit Tuesday-Friday or make an appointment for Saturday. Hal Brainerd also offers photography workshops and private lessons.

Next up: one of America’s “Coolest Small Towns.” It’s an easy drive from Bluefield and not too far— an hour and fifteen minutes at most.

As you approach Fayetteville from US 19, you’ll see a bright mural on North Court Street. It highlights area attractions and historic buildings. While you’re in town, pop into boutiques for local artwork and trends. Twisted Gypsy’s has eye-catching glass pieces, jewelry, and clothing. The Hobbit Hole bursts with intriguing finds, too. You’ll find anything from vintage kitchenware to kitsch. It’s where locals go to beautify their homes with something unexpected.

After that, you’re just an hour away from West Virginia’s capital!

Pack your day with art of every persuasion! You’ll find attractions like:

The Eastern Panhandle has distinctive art, too. In fact, it deserves an itinerary of its own! For your next road trip, consider these places:

Known as the “Gateway to the Shenandoah Valley,” this city has flair and personality. Just check out the public artwork. 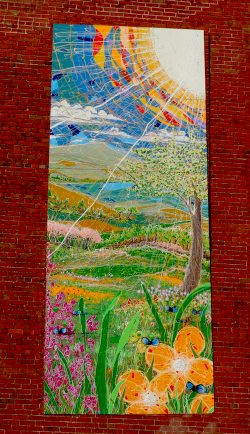 “Spring Fling,” a cheerful flowering meadow made with reclaimed latex house paints and acrylics, greets visitors to the city’s historic district. The painting by David Heatwole is the city’s largest mural, but you can find many other pieces of art throughout the city, too.

William Cochran’s “The Lonesome Touch” occupies 2 recessed arches on the side of the old Market House. It depicts a master fiddler playing while a young female student listens. In the second arch, a contractor pauses his work to listen to the music. The figures are so realistic, you might not realize they’re paintings!

Also part of the “Put a Lid on It” initiative is the flower mosaic at Martinsburg Public Library. Like the Van Gogh mural, this one is also made of recycled plastic. There’s also an original N.C. Wyeth painting upstairs! there’s the flower mosaic at Martinsburg Public Library. It’s made entirely of recycled bottlecaps. There’s also an original N.C. Wyeth painting upstairs! The flower mural (plus the one depicting Vincent Van Gogh) were created as part of the 4-state “Put a Lid on It” initiative to recycle garbage as art. (The Van Gogh mural has been moved inside to Eastern WV Community and Technical College.)

The red apple sculpture on West King Street is another highlight. Martinsburg’s rich agricultural heritage inspired the fiberglass statue, which doubles as a time capsule.

Chartered in 1762, this colonial town has a majesty all its own. The townhomes and buildings are especially distinctive.

Ramble through the historic district and see which one catches your fancy; some have ornate facades, like the former Shaharazade’s Restaurant & Tea Room and 1909 opera house. As for murals, the Handlebar Photo Booth Company has flowers — bold white ones!

Shepherdstown also has its fair share of exhibit spaces. The Bridge Gallery has landscape paintings, modern pieces, and sculptures, while Badgerhound Studio and Gallery has textiles and realistic artwork. 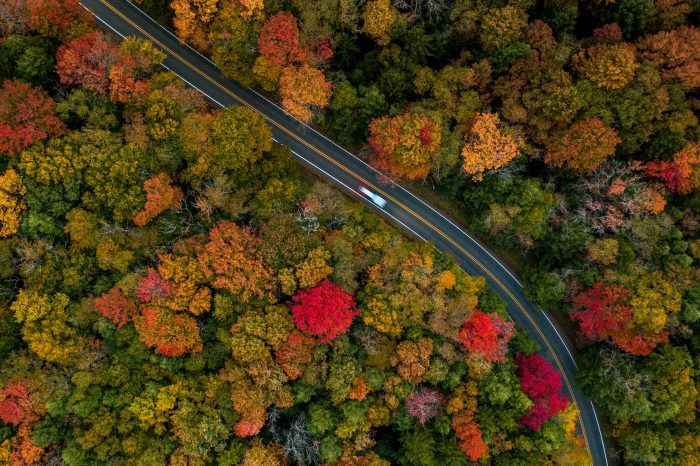