How to spend a weekend in Charleston (outdoors & about town)

West Virginia’s capital city has a rich old-school charm, but a modern scene and a small-town feel.

Charleston has the history you’d expect from a capital city (Daniel Boone once lived here, after all), but a growing arts scene and a spot along the confluence of the Elk and Kanawha Rivers makes it a hub for recreation and culture, too.

We highly recommend staying for more than a weekend, here are some options for making the best of a short trip to the state’s biggest city:

What to Do Downtown

This mix between old and new, or “hip and historic” as the locals call it, gives way to an eclectic vibe.

Quirky establishments, like a market housed in a turn-of-the-century train station, pepper the downtown streets. The East End is an epicenter of cultural creativity, and is easy to find— just look for the 23.5 karat gold-covered dome above the Kanawha River. The West End has experienced a modern-day renaissance with a burgeoning arts scene and historic preservation. 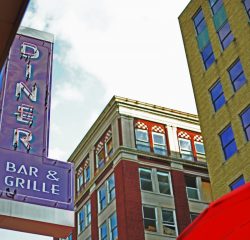 “This is where we can deliver on our ‘hip, historic’ promise,” said Alisa Bailey, president & CEO at Charleston’s Convention and Visitors Bureau. “We’re grittier, but we still have that music scene, we still have that arts scene and it’s easy to get around.”

The first stop on any tour of Charleston must be to that gold-domed capitol building. Learn more about West Virginia’s coal and fossil history through interactive exhibits in a family-friendly atmosphere at the West Virginia Culture Center and State Museum. While you are in the area, make a reservation to tour the Governor’s Mansion, a Georgian Revival-style home filled with antiques from the early 20th century.

After exploring the landmarks around capitol (look for statues of Stonewall Jackson and Abraham Lincoln), visit the Heritage Towers Museum & Culture Center, which celebrates the contributions of African Americans in West Virginia’s history.

Continue your tour at the Clay Center for the Arts & Sciences. It’s one of only a few in the country that houses the sciences, visual arts, and performing arts all in a single museum. Several of the exhibits pay homage to West Virginia’s history, and every Saturday there is a workshop for families. Kids love the Avampato Discovery Museum, with interactive exhibits about earth science, engineering, energy, magnetism, and health.

Stop back by the Clay Center at night for a performance by the West Virginia Symphony Orchestra or an off-Broadway show. On Fridays from May through September, walk over to Haddad Riverfront Park on the riverfront for the Live on the Levee concert series, where genres range from African to pop music. 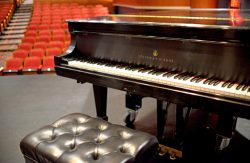 “The Maier Foundation Performance Hall [in the Clay Center] is considered one of 3 best acoustical performance halls in the world,” Alisa said. “When they built it, helicopters could be heard at the hospital across the street, so they actually had to build another façade completely around the performance hall.

“Tony Bennett, Diana Ross and all these national acts that come in, many of them want to sing a cappella for a couple of numbers because the acoustics are so good.”

If you are visiting in the summer, head over to Appalachian Power Park to catch a good ol’ minor league baseball game.

Get Back to Nature

Keep 1 eye on the ground and 1 eye to the sky, because the forest is known for both its wildflowers and bird population. Birdwatchers come from as far as Canada to catch a glimpse of 1 of the 19 species of wood warblers.

“A lot of travelers like this notion of ‘hub and spoke’ travel,” Alisa said. “You stay in a place, and then each day drive somewhere. We are fortunate to have world-class outdoor adventure just an hour away. A lot of our guests like to come down to the New River Gorge for ziplining, rafting and more, but then come back in the evening.”

Speaking of the New River Gorge National Park, it’s well worth the day trip (or even a half day trip.) Besides its breathtaking beauty, the NRG is an outdoor adventurer’s playground. Try world-class whitewater rafting on the New River (you can always book a trip with a local outfitter if you are inexperienced), or visit the famous bridge that spans the gorge. Hike one of the hundreds of trails through peaceful forestland to scenic overlooks. If you are a climber, you have more than 1,000 routes to choose from, both trad and sport.

Whether you spent the day exploring museums or nature, you’ll have surely worked up an appetite. Bluegrass Kitchen, Little India and Tricky Fish keep the East End hopping, while crowd-pleaser Dem 2 Brothers & A Grill serves up hearty meals on the West Side.

Unless you want to camp in Kanawha State Forest, book a room at one of the 7 hotels in the downtown area, mostly notable hotel chains. All of the hotels in the city center make it easy to walk around, or make a great homebase to explore the outskirts of this historic capital city.