Anglers: this is your dream escape

Reel in plenty of relaxation and that prize bass at the Angler’s Inn.

This Victorian bed and breakfast is nestled right by the Potomac and Shenandoah rivers— a relatively undiscovered treasure trove, considering it’s known for some of the best smallmouth bass fishing in the nation, and only 1 hour from Washington, DC.

The Shenandoah and Potomac are both well-known by serious anglers. They were both named top 10 smallmouth bass spots 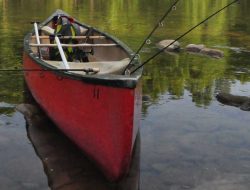 by Fly Fisherman Magazine. There are also teeming with healthy populations of tiger muskie, largemouth bass, and walleye. And the past few years have been even more plentiful than usual.

Inn co-owner Bryan Kelly has more than 25 years of experience in stream and river fishing, including competitively and on these waters— so he knows all the best spots to reel ‘em in. And the most beautiful, too.

Smallmouth bass are a warm-water fish, so the best time to snag them is when the water temperature is between 65-72 degrees, typically from May through October.

But each season brings its own strategies: you’ve really got to lure them out in the early spring when they’re coming out of hibernation, and they get feisty in the late summer. The guides know the patterns, so they’ll help you navigate the art and skill of the catch, as well as the waters.

Whenever you choose to head out with Bryan and his crew, it’ll be either light tackle spin fishing with artificial lures, or fly fishing. All the trips are catch and release.

The average size smallmouth catch is typically between 12-14 inches. But if you’re lucky, the Anglers will lead you to a coveted 19-22 inch trophy.

You’ll have plenty of time to search out your prize. It’s an all-day trip that starts with an an early breakfast (including the inn’s all-star signature baked goods), then a shuttle to the boat ramp. You, your guide and up to 1 more fisherman can fit into either an inflatable raft with a fishing frame or Bryan’s own handcrafted wooden McKenzie drift boat, depending on where you plan to go.

You may pick a calm section, or you may hit some rippling whitewater rapids. Plan to be on the water for about 8-10 hours (Don’t worry, they’ll bring along lunch for you, too!)

Gear’s included in the journey, but if you want to take home some quality tools for your own trips, Bryan and his wife also own White Fly Outfitters store, which is about a mile away from the inn. They have a variety of fishing gear, light tackle and fly-fishing, and fly tying material.

Want to explore on your own? The shop is also a Feelfree Fishing kayak dealer, so you can even buy or rent your own boat. They’ll even shuttle it to the river for you.

After a day of casting your line, head back to rest up at the inn.

The circa-1880 building has a historic charm that fits right into the richly historic town, but its amenities are modern.

“You can make this a home base and take in a lot of activities while you stay,” Debbi said. “It’s so beautiful. We are blessed to live with such topography.”

That is why so many from Washington, D.C., just over an hour’s drive away, choose to visit this picturesque hideaway. But the charm isn’t just the history, it’s also the Kellys themselves. They get to know their guests personally.

“They’re our friends,” Debbi said. “We go to their weddings. It’s really wonderful. It’s a piece of the business that we never anticipated, having the opportunity to develop relationships with such cool people.”

The Kellys love getting to know all the guests, anglers or not. But they do love sharing their love of the sport.

After their nearly 2 decades of close friendships with their guests, they said one story that is near and dear to their hearts was a young family that visited in the early days when they first opened the inn. They cultivated a newfound love for fishing that they passed along, too.

“Many, many years ago, a couple and their son came to stay with us,” Debbi said. “The lady was from Russia and the boy was a teenager. They stayed for a week and wanted to go out 2 or 3 times. Well, this young man just fished from dawn until dusk. He was just amazing.

“They came back a couple of times and then he went off to college, then he got married and had a couple of kids.

“Just this summer, his mother called up to make a reservation for the grandparents to bring the grandson fishing. So, they called back a day later and said, ‘Well, we told our son that we were going to bring his son here and he said, you aren’t doing that without me.’

“So, they went out and just had the time of their lives. It was a lot of fun to see that generational transition.”

And of course, for any angler, a return trip is a no-brainer. Once folks realize how great the fishing is, they come back again and again. Some even made the journey annually for 15 years or more!

But it’s never too late to start your own fishing retreat tradition with year 1.